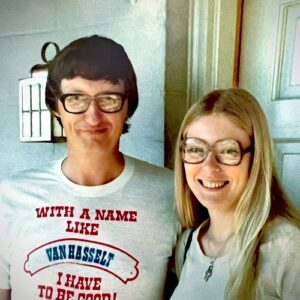 My sister, Marianne van Hasselt, had the good fortune to travel with my father during a gap year between high school and art school.  I say “good fortune” somewhat facetiously; as is usually the case with family-run businesses, everyone gets roped into “volunteering” free labor.  At the time, my father’s workshops were doing quite well. And he always appreciated having a “gopher” around to help with class preparations, making coffee, or whatever else needed to be done.  For better or worse, my sis had that job title or something like it.

My sister recalls, “One of my earliest memories is working my first job in the family business: licking stamps and folding brochures and making it look like an adult or a machine had done it, with precision.” My father had an eye for professionalism, even though he usually lacked the money to pay for it, and my sister and I were cheap labor.  Of course, he was our father, so he would encourage us to have some fun.  Marianne says, “[We’d] make it fun by racing to see how many brochures you can get folded!”  As the speed increased, the quality went down, and our substandard work would not go unnoticed.  Here are some thoughts and reminiscences from the many lessons learned from our father, in her own words. — Chris

I traveled with Daddy for a year, 1979 to 1980, before I went to art school. I experienced the importance of the workshop method; the student is away from their normal life,  focused on what they’re learning.
We were taught from an early age as we drove around in the car. We were made aware of the colors and shapes around us. Bad logos that were impossible to read, colors too close to the same value as it made it impossible to clearly understand what you’re looking at, shapes that look like other shapes, and of course, this evolved into the Building Blocks.
He taught me inventiveness. Looking at something from another perspective, putting things together differently, even coming up with unusual or creative product names. I remember my parents “inventing” spaghetti on a stick, the Wopsicle, (yes, politically incorrect).  Many years later, the idea showed up in the parody movie, Mafia: A small child on the street is selling spaghetti on a stick!  He also showed me that most mistakes aren’t fatal, especially in watercolor. You can always wash out areas, paint over them, tear that painting up and use the other side, o, using acetate, you can even test out alternatives.
I watched Daddy, as a good student of John Pike, being able to assist him in his last workshop in Woodstock New York. At the time, John couldn’t speak because of losing 1/3 of his tongue to cancer. Daddy was able to lead the critiques and discussions, emulating a beloved friend and mentor.
On the road between workshops, I was Daddy’s navigator and co-driver, trading off and sleeping. On 12-hour days of driving, I gradually worked up from being able to only drive for an hour to finally 10 hours safely awake. I remember after John‘s workshop rationing ourselves to having only one Entenmann’s soft chocolate chip cookie every hundred miles so the box would last longer. That devolved down to 50 miles! Enjoy life.
Driving with him also taught me persistence, to just keep going to get through it. Driving the two-lane highway in Oklahoma’s Panhandle at night in the middle of an intense rain storm, maybe tornado related, with many signs at the side of the roads saying “Flooding for the next 23 miles” or 18 miles or…it looked like it was already flooding, but there was nowhere to stop. Driving through heavy snowstorms in Santa Fe. Just keep going.
I learned the practical experience of the van Hasselt method of safely convoying 15-20 cars through long distances and city traffic to keep everyone together, drive safely, and get to the location. Follow the Shepard Boy’s rules and it happens. I learned to appreciate beauty even in the smallest thing. Daddy was always looking at the views around him and figuring out how to mix what he saw, transmuting the ordinary into extraordinary art.
When I traveled with him, the first week was realistic painting, and the second week was loose figurative painting, like the California school of painters. Daddy struggled with that; to be sure he was doing a good job as a teacher; he worried if he could loosen up and paint in a figurative decorative manner. He studied many other artists’ books on the nights before and during that second week. From his work, it seemed that became easier for him.
Daddy was a ham and loved to paint and teach. I’ve seen his influence on so many students who became better painters and teachers and who continue to share his love of seeing the world’s beauty and preserving that beauty with brush and paint.
Tony van Hasselt isn’t gone. He is in all of us, his students, who’ve incorporated things he taught us.
← Newer Posts
Older Posts →